Data backs up 'driving while black' concept ~ while story line is NC centric possibly germane to other parts of this nation!

CBS 17, quote:
[Frank] Baumgartner looked at 22 million traffic stops over 20 years. The numbers are all self-reported by law enforcement agencies throughout the state.

"Well everyone has heard of the concept 'Driving While Black' so I was curious about whether there would be strong statistical evidence to support those allegations," Baumgartner added. What that data showed left no doubt in his mind.

In the state of North Carolina, black male drivers are about 96 percent more likely to be searched once pulled over than their white male counterparts.
"A young black man walking on his way to school or going to work has a very high probability of being pulled over and investigated and it might not be very pleasant," Baumgartner said.

Officers are allowed to search vehicles during a traffic stop if the officer suspects the driver of criminal activity.

Here's a look at the numbers in Raleigh:

From January 2014 to January 2019, Raleigh police recorded 9,504 traffic stops with searches involving male drivers. A total of 6,612, or 70 percent, of those male drivers stopped are black.

Baumgartner said then they're using the traffic code or the vehicle code to find an excuse to, a legally testified excuse, to have a conversation with that person.

CBS 17 requested a sit-down interview with Raleigh Police Chief Cassandra Deck-Brown to discuss the racial disparity in stops and searches in her department. After asking at least three times, CBS 17 received a one-sentence email saying, "The Chief is not available for this interview." 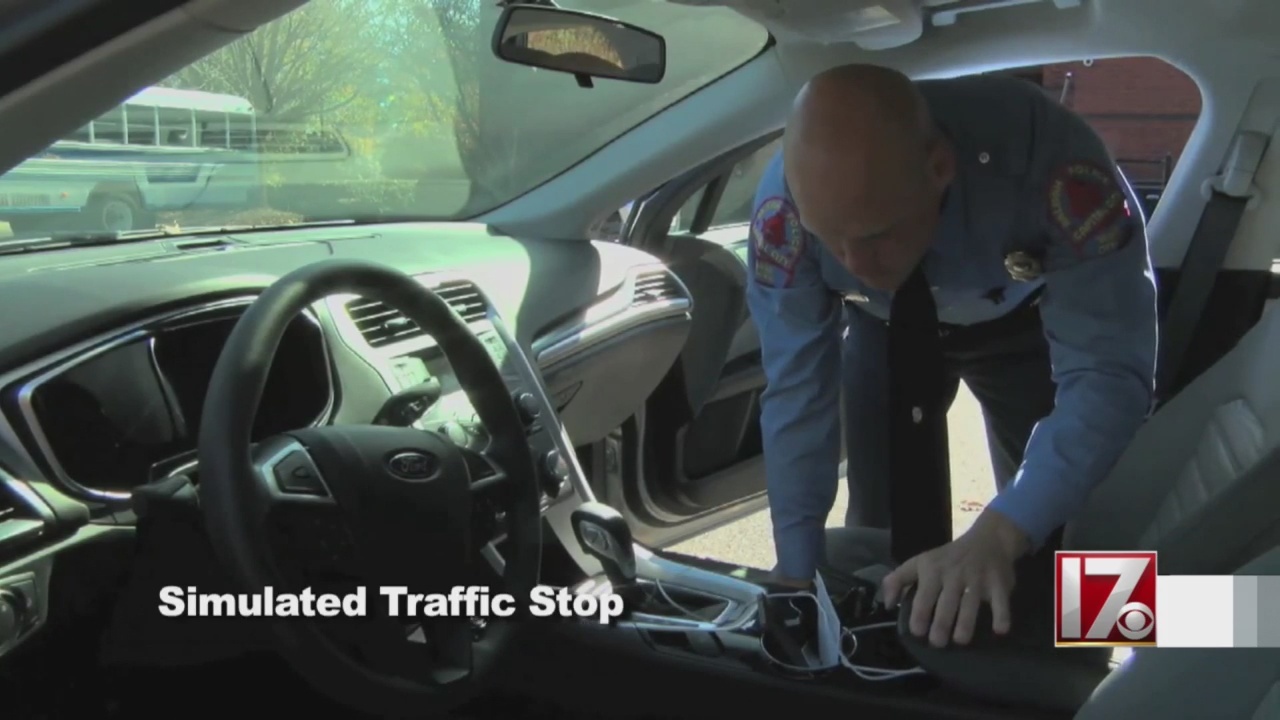 CBS 17 wanted to know the chances of a person of color being pulled over and their vehicle searched by Raleigh police?

... Each time, he says the officers stopped him for a supposed traffic violation which lead to a search of his car. ...
Click to expand...

What has this fella done to seek a redress.
F

My question is what data did he look and how the data was acquired .

I am betting this was politically motivated research with a specific out come in mind.
Last edited: May 6, 2019

Whoever buys the book will learn a great deal...will the learning be worthy of the cost incurred...we shall see.

In the video Raleigh Police Chief Cassandra Deck-Brown appears to be a person of color. Like most police, blue.

OC for ME said:
Whoever buys the book will learn a great deal...will the learning be worthy of the cost incurred...we shall see.
Click to expand...

Tks OC for ME As mentioned was gonna order the book but got caught in a litany of “honey-dooos” which took precedence and me away from my puter, then plum forgot to order it...

Kindle is 12$ and i that much out at cheepo restaurants.

Again tks for the reminder...
Suspect citizen quotes from acknowledgment page:
This project began in 2011 with a phone call from local attorney Chris Mumma, asking if Baumgartner could volunteer to do some data analysis for a commission looking into racial disparities in criminal justice. The state had collected data on traffic stops but had never analyzed them.

We also acknowledge the assistance of the NC Department of Justice and State Bureau of Investigation for making available the official statistics on which this analysis relies, and for answering technical questions about the organization of this complex database. Unquote.

Of interest...for those so inclined and enamored with L, D/L, & S this site covers NC, MD, IL.

... another liberal group promoting the fundamental transformation of America ...
F

One can look at all the data one wants but data does not tell you want the officer was thinking at the time of the stop.

Firearms Iinstuctor said:
One can look at all the data one wants but data does not tell you want the officer was thinking at the time of the stop.
Click to expand...

Based on the numbers, I believe you can surmise what was on the officers mind. Part of the problem is that officers always makes the following claims: it is a high-crime area, drug activity, as well as assaults, robberies, and domestic violence frequently occurred in the area. Yet, defense counsel never challenges such claims. Cops always use those magic terms like: he was calm, but seemed somewhat nervous; he showed passive-aggressive behavior; it appeared he was hiding something; and the list goes on and on. We all know that even though the cop has no formal training in psychology the court will claim the officers years of experience carried the day.

Look, the courts have made it clear, cops are allowed the lie, even on the witness stand. I have read hundreds of cases where the courts make excusses for the cops dishonesty. This is not cop bashing, this my life experience.
Last edited: May 6, 2019
F

Well if you never been a LEO I would not expect you to understand what experience [policing in area.

Can it be abuse yes can it catch a lot of bad guys yes.

Firearms Iinstuctor said:
Well if you never been a LEO I would not expect you to understand what experience [policing in area.
Gives you about the criminal element in that area.
Can it be abuse yes can it catch a lot of bad guys yes.
Click to expand...

The mayor of Hoschton, a nearly all-white community 50 miles northeast of Atlanta, allegedly withheld a job candidate from consideration for city administrator because he was black, an AJC investigation has found.

According to documents obtained by The Atlanta Journal-Constitution and interviews with city officials, Mayor Theresa Kenerly told a member of the City Council she pulled the resume of Keith Henry from a packet of four finalists “because he is black, and the city isn’t ready for this.” The AJC’s investigation into the controversy revealed not only a deeply flawed hiring process, but also hard racial attitudes inside Hoschton’s government. All of this occurs as the city of fewer than 2,000 people just outside Gwinnett County is poised for dramatic growth with the construction of thousands of new homes. Unquote https://www.ajc.com/news/local-govt...t-black-job-candidate/Qr403ZLnF5VuB8CzpngLjP/

I can see the mayor’s understanding about discerning the criminal element in the job candidate...

Oh wait FI, is this abuse you spoke of or did the citizens catch their bad guy mayor?

You can spout LE privilege bout superior experience level based on ’special insight’ but still sounds like ethnic profiling to my ears.

Firearms Iinstuctor said:
Well if you never been a LEO I would not expect you to understand what experience [policing in area.

Can it be abuse yes can it catch a lot of bad guys yes.
Click to expand...

Oh, I understand. I've worked on too many cases where the cop takes the stand and lies through their teeth, knowing it's a lie and when confronted with the undisputed evidence that it is a lie, then making excuses for the lie.

The major problem is the courts cover for the cop. And the cop knows it and they know the court will protect them.

I believe body-cams will force cops and courts to curtail these abuses.

I hope you were not one of those cops that lied to get someone convicted?

OC for ME said:
Read the fine print ... https://www.southerncoalition.org/

... another liberal group promoting the fundamental transformation of America ...
Click to expand...

No but you're getting a little bit warmer.

Firearms Iinstuctor said:
Well if you never been a LEO I would not expect you to understand what experience [policing in area.

Can it be abuse yes can it catch a lot of bad guys yes.
Click to expand...

Interesting list. Other than the last two, digital age and whatever the WASP culture is, the government (at all levels) is the culprit or savior.

OC for ME said:
"Other than the last two, digital age and whatever the WASP culture is, the government (at all levels) is the culprit or savior."

en.wikipedia.org
White Anglo-Saxon Protestants (WASPs) are a social group of typically wealthy and well-connected white Protestants of British descent in the United States. Until after World War II the group dominated American society and culture and the leadership of the Republican party. They were well placed in major financial, business, legal and academic institutions and had close to a monopoly of elite society due to intermarriage and nepotism.[1][need quotation to verify]
During the latter half of the twentieth century, outsider ethnic and racial groups grew in influence and WASP dominance weakened. Americans are increasingly criticizing the WASP hegemony and disparaging WASPs as the epitome of "the Establishment". The Random House Unabridged Dictionary (1998) says the term is "Sometimes Disparaging and Offensive".[2][3] The term WASP is often used as a pejorative to classify their historical dominance over the financial, cultural, academic, and legal institutions of the United States.[4]
Sociologists sometimes use the term very broadly to include all Protestant Americans of Northern European or Northwestern European ancestry regardless of their class or power.[5]The term is also used in Australia, New Zealand and Canada for similar elites.[6][7][8][9]